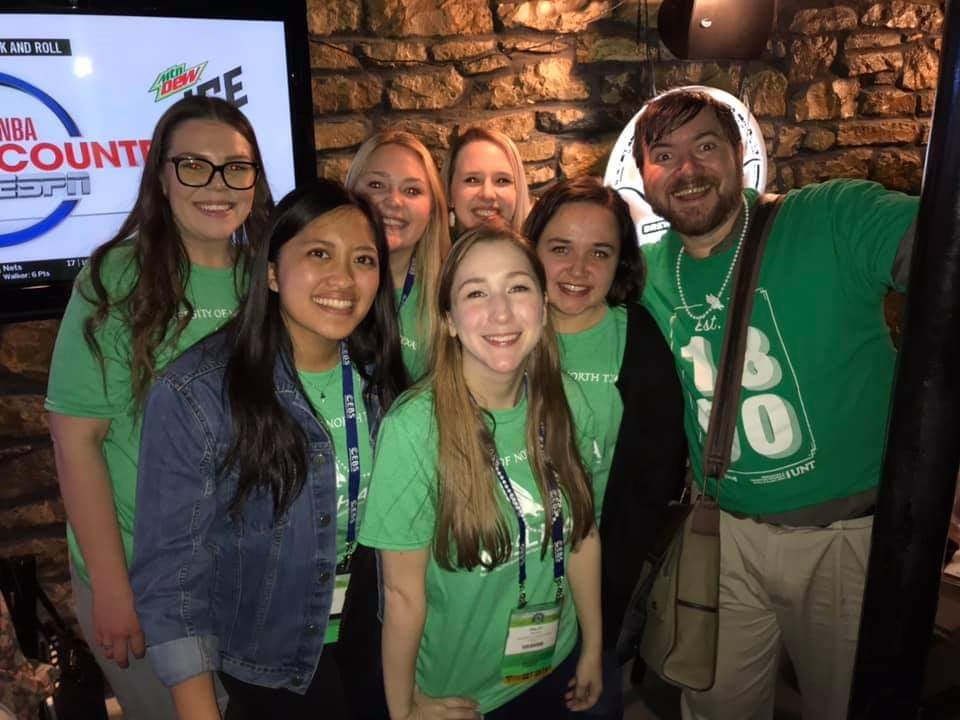 DENTON (UNT), Texas – The University of North Texas College of Health and Public Service (HPS) Department of Audiology and Speech-Language Pathology (ASLP) is the proud winner of the 2019 Texas-Speech-Language Hearing Association Praxis Bowl. The team – made up of second year speech-language pathology (SLP) graduate students Katie Chesnutt (alternate), Shanielle Henslee, Kristin Ransom and Krystin White – took the top honor at the 63rd Annual Convention and Exhibition February 28 through March 2. The Jeopardy-like competition pitted 15 speech-language pathology graduate schools in Texas against each other in a knowledge bowl based on potential questions for the Praxis Examination – an integral component of American Speech-Language-Hearing Association certification standards.

The competition is wildly popular among convention attendees and draws a large crowd of spirited fans who make posters to cheer on their schools. The event lasts several hours and while fun, can be grueling.

“It was so exciting, but also stressful,” said Shanielle Henslee, speech-language pathology graduate student clinician and member of the winning team. “Fellow peers from each school were cheering and the room was packed. We weren’t in first place until the fifth or sixth round, so every time the rankings would come up on the screen, it was intense. We had an advantage in that our team worked well together.”

This isn’t the first time UNT has taken home a win, but it has been a few year’s since they’ve claimed the top honor.

“We were determined to win again and further prove to the state community of SLP programs that UNT SLP grad students are well-prepared and ready for the job market,” said Stacy Nunnelee, speech pathology clinical supervisor and faculty lecturer. “We pick our team based on academic performance and class ranking, and we look for students who will be strong and confident under pressure and will work well on a team. We were very happy with our team this year and they proved themselves perfectly.”

Robyn Martin, clinical supervisor and adjunct faculty, says there’s more to it than just the thrill of winning.

“The students are able to get a preview of possible questions that could be asked on the Praxis exam,” Martin said. “This gave our students a review before they took their comprehensive exams a week later and some students are taking the Praxis exam in the next couple of weeks. There was also this sense of camaraderie for their friends competing and for the school.”