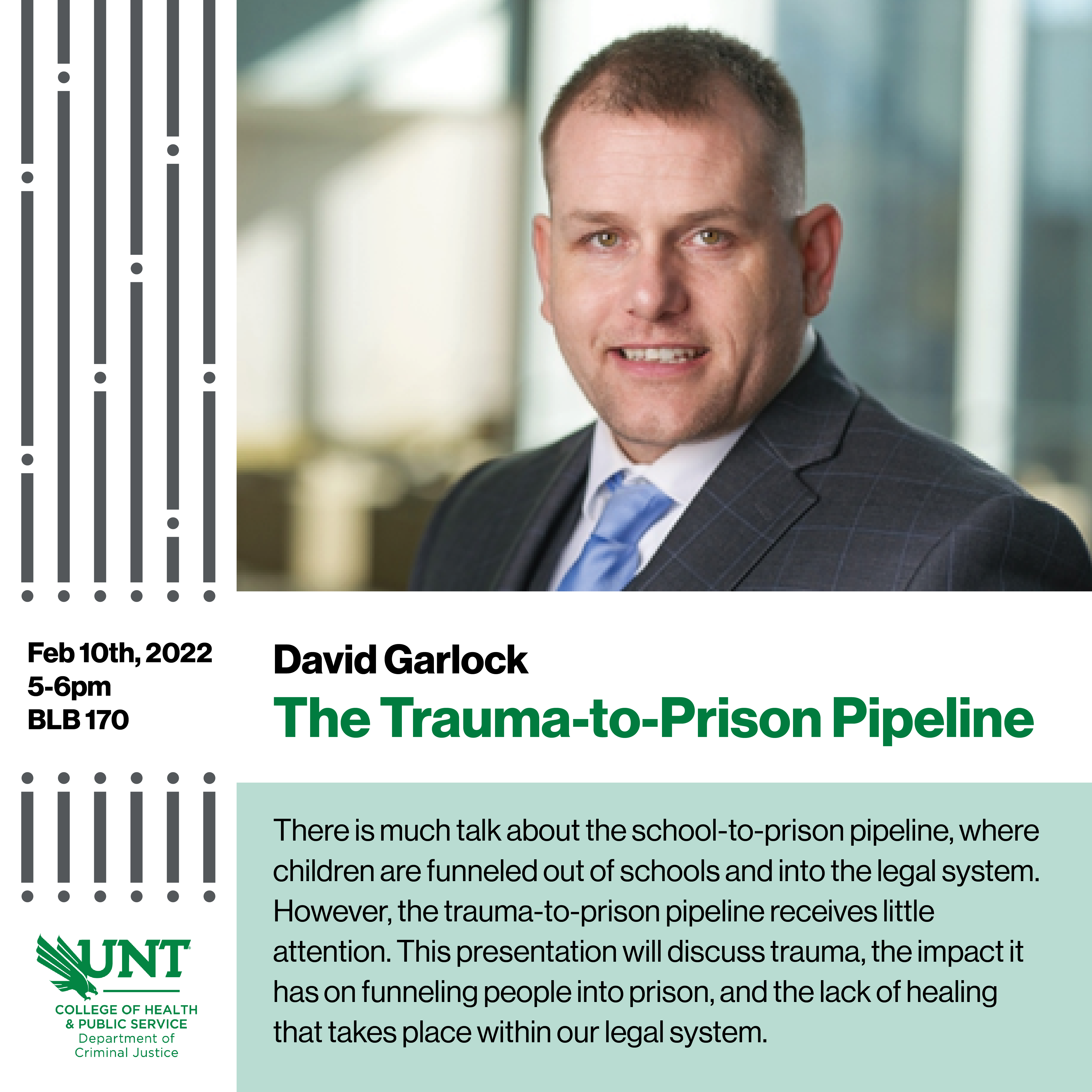 DENTON (UNT), Texas – David L. Garlock’s childhood wasn’t easy. He and his brother were raised in a dysfunctional home. After his parents’ divorce and custody issues with both parents, there were multiple actions that put them in contact with a man who began to sexually abuse both children.
“The first time that I saw my mom in two years was supposed to be a joyous time, and it was for a while until the abuse began,” Garlock said. “At 11 years old, I lost my innocence and who I really was. I had to create masks so no one could know what was happening to me.”
The brothers suffered in silence – until the fateful night they decided to take matters into their own hands.
“The sexual abuse turned into severe physical abuse – this man beat the crap out of us daily and tried to kill us numerous times,” Garlock said. “In June 1999, we made an irrational decision to escape this abuse by taking his life. There isn’t a day that goes by that I don’t regret that action.”
Garlock was arrested in 1999 at the age of 20 and sentenced to 25 years. A client of the Equal Justice Initiative, he was released on parole in 2013 after serving more than 13 years. While incarcerated, he pursued several educational opportunities, then went on to earn his bachelor’s degree from Eastern University upon his release.
From there, he worked as the Lancaster program director for New Person Ministries, a nonprofit program for men who are returning to society from incarceration, including those convicted of sex offenses, from 2017-2020. Garlock graduated from JustLeadershipUSA’s Leading with Conviction™ fellowship program in 2019, and currently serves as the Central Pennsylvania field organizer for the Straight Ahead! organization. He also serves on several national boards dedicated to criminal justice reform.
“My story and experiences give me a great perspective on what needs to change in the criminal legal system – not the criminal justice system,” Garlock said. “I advocate around reentry, prison education, prison conditions and those who are on the sexual offense registry. I believe and fight for reform for ALL.”
Garlock also enjoys educating the next generation of criminal justice professionals on rehabilitation and advocating for an effective and equitable justice system and is a frequent speaker at colleges and universities. In that capacity, the University of North Texas College of Health and Public Service Department of Criminal Justice is excited to welcome Garlock for the following presentation:
“The Trauma-to-Prison Pipeline”
Date: Feb. 10
Time: 5 to 6 p.m.
Place: UNT Business Leadership Building, Room 170, 1307 W. Highland St., Denton
“There is much talk about the school-to-prison pipeline, where children are funneled out of schools and into the legal system. However, the trauma-to-prison pipeline receives little attention,” Garlock said. “This presentation will discuss trauma, the impact it has on funneling people into prison, and the lack of healing that takes place within our legal system. This is an issue and topic that many advocates speak about. One of my colleagues, Taylar Nuevelle, who founded WhoSpeaks4Me, has been talking about this topic since 2015. That is why I am addressing it in this conversation.”
To register, scan the QR code below. For more information, contact Dr. Haley Zettler, assistant professor of criminal justice, at haley.zettler@unt.edu.