Jose Garcia is one of two HPS students to earn this honor that only six students received university wide. 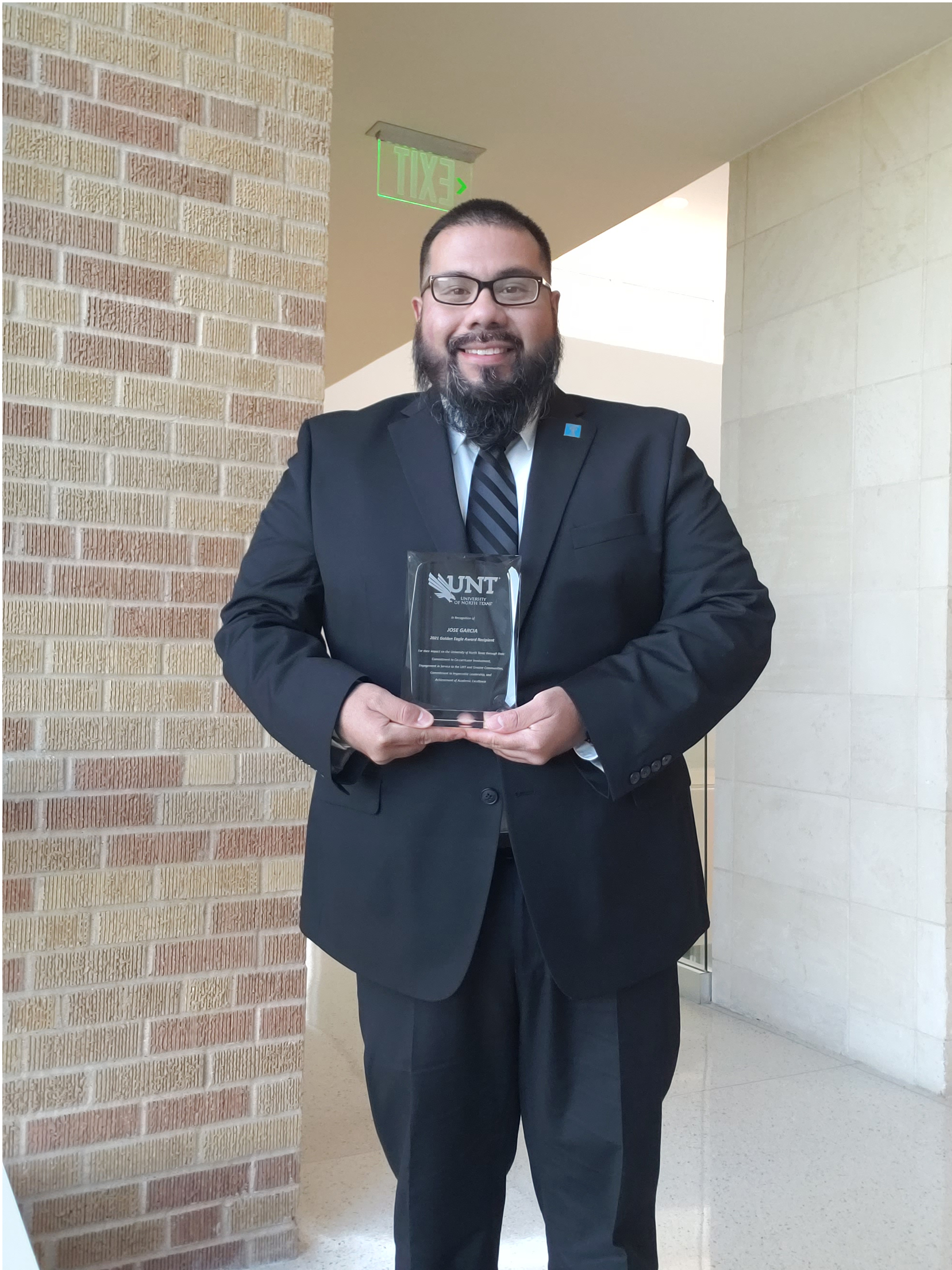 DENTON (UNT), Texas – Jose Garcia, who’s pursuing a bachelor’s degree in social work in the University of North Texas College of Health and Public Service, has earned the esteemed UNT Golden Eagle Award from the Division of Student Affairs and Multicultural Center. It is the most prestigious award that UNT bestows on a student leader. Recipients are those who show a tremendous commitment to co-curricular activities and enhance campus life at UNT by engaging in considerable service and displaying great leadership, all while achieving excellence in the classroom.

“I could not have achieved this award without the support of my family, professors, student organization advisors and classmates at UNT. As a non-traditional student, it can be challenging to make sure everything is taken care of at home, school, student organizations and volunteering,” Garcia said. “However, being part of student organizations at UNT, from President of the Social Work Student Association, Secretary of Omega Delta Sigma, Sergeant at Arms of the Student Veteran Association, and being a member of several honor societies Phi Alpha, Phi Kappa Phi, The National Society of Leadership and Success, Service Academics Leadership Unity Tribute and Excellence, Alpha Sigma Lambda and the Presidents list while at UNT. This award makes it even more memorable. When I applied at UNT, I never thought I would have been as involved as I have been. Achieving this milestone makes it that much more rewarding.”

Winners were announced at the Eagle Awards Ceremony on April 19th. It was held in a hybrid style where winners were allowed to attend in-person, socially distanced.

Garcia was nominated by Irine Abraham, lecturer in the Department of Social Work, who says he’s more than deserving of this honor.

“Mr. Garcia is known for his reputation as an enthusiastic leader in our department. He diligently works to empower all those around him,” Abraham said. “His drive, determination and integrity are just a few notable characteristics of his academic and leadership achievements."

Garcia who says he’s very grateful for Abraham’s support, plans to pursue a master’s degree in social work so he can make a difference in the lives of others.

“I want to work in the education sector, and I want to work with children and help them achieve any goals they have,” Garcia said. “I want to be the support system they may not have at the moment just like I received in middle school.”