Can we train our brains to halt tinnitus? 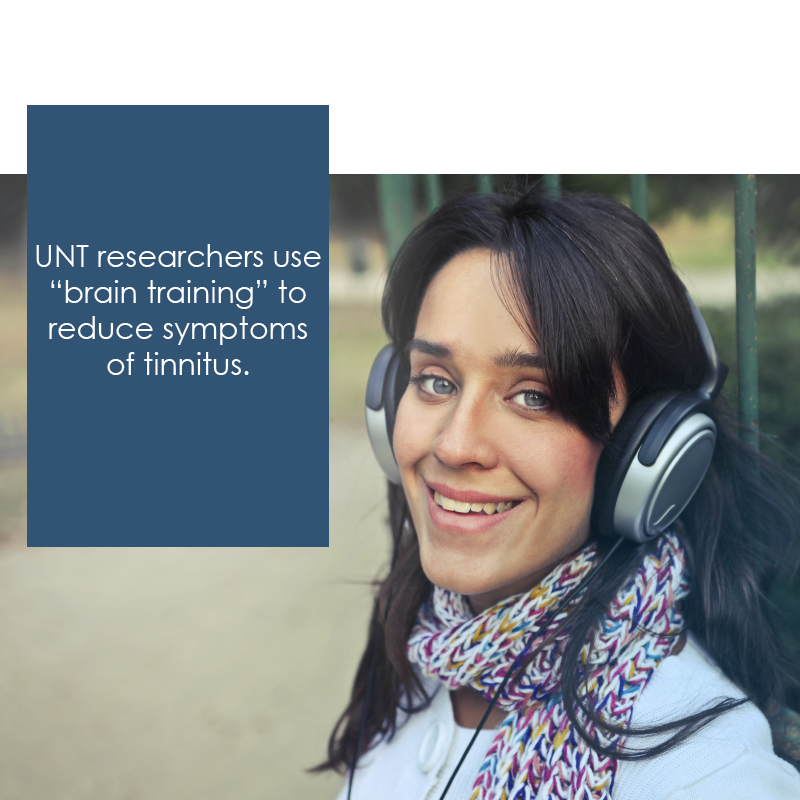 DENTON (UNT), Texas – Tinnitus, which most people describe as ringing in the ears, is the sensation of hearing sounds in the ear without an actual external sound being present. The U.S. Centers for Disease Control and Prevention estimate that nearly 15 percent of the general public — more than 50 million Americans — experience some form of tinnitus, often to a debilitating degree. While there is currently no scientifically-validated cure for most types of tinnitus, researchers in the University of North Texas College of Health and Public Service (HPS) are hoping that by retraining the brain, they can lessen the severity of tinnitus.

Dr. Amrita Pal, postdoctoral researcher, and doctoral student Joshua Caldwell, under the supervision of Dr. Daniele Ortu, research assistant professor in the Department of Behavior Analysis, and Dr. Kamakshi Gopal, professor and chair in the Department of Audiology and Speech Language Pathology, have worked together to determine if behavioral intervention can improve tinnitus.

“Tinnitus is a massive problem, especially in veteran populations as they’ve often been in close proximity to explosions. Cells at the cochlear level are often destroyed and areas of the brain can continue firing in somewhat of a phantom response, similar to someone who has lost a limb but continues to feel it,” Dr. Ortu said. “What we’ve devised is an experiment where our subjects took part in five sessions – two at the audiology lab and three in the behavior analysis lab – to see if we can reduce tinnitus in loudness and frequency of occurrence.”

Subjects with tinnitus underwent two, four-hour-long audiology test sessions, conducted by Joshua Caldwell under the guidance of Dr. Gopal. They assessed the subjects’ hearing status, measured tinnitus characteristics such as loudness and pitch of the tinnitus, acquired brain responses to sound signals, and obtained info on the impact of tinnitus on the individuals’ daily life.

Following training, subjects were re-tested in the audiology lab to assess the benefits of training. Results indicated that training helped some subjects by either decreasing the frequency of occurrence of tinnitus or decreasing the loudness of tinnitus. Auditory responses also showed promising sensory-perceptual changes at the brain level.

“At this time, we are cautiously optimistic about this training model, but we still have a lot more work to do in this area before solid conclusions can be drawn,” Dr. Gopal said. “The pilot findings from this study will help us refine the protocols for our next study.”

Dr. Neale Chumbler, dean of the college, says this shows how cross-departmental collaboration can make significant strides in research.

“This study exemplifies the importance of cross-college, interdisciplinary collaboration. When researchers with such strong skillsets and knowledge come together, they can help change lives, as Dr. Pal, Mr. Caldwell, Dr. Gopal and Dr. Ortu have shown,” Dr. Chumbler said. “Their hard work may lead to a discovery that has implications to change millions of lives in a minimally invasive way. This is an exciting collaboration that would not have come about without our faculty stepping outside of their silos with the potential to deliver innovative treatment options.”

The researchers plan to continue their study with a larger sample size. The research team recently won an award for Best Professional Poster in the Tinnitus Category for their research and Joshua Caldwell won the best oral presenter award at the American Academy of Audiology National Convention in Columbus, Ohio.