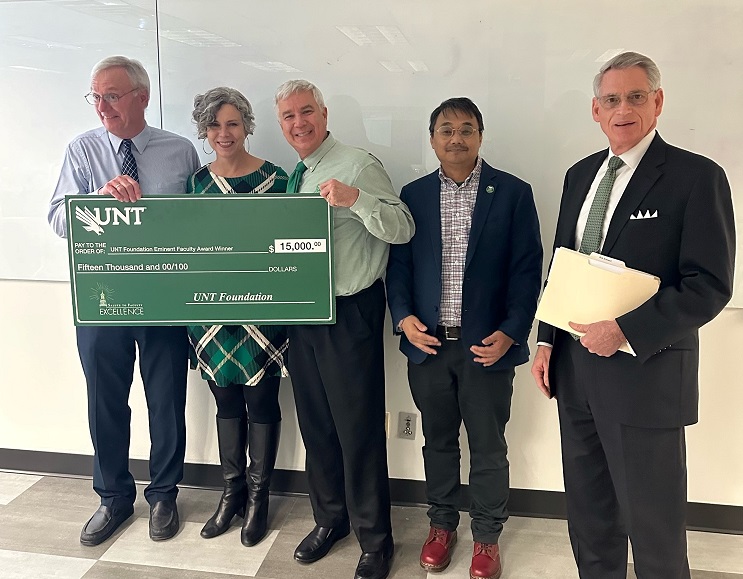 The honor “recognizes a faculty member, who has made outstanding and sustained contributions to scholarly-creative activity, teaching, and service and has served as an inspiration to the University of North Texas community.”

DENTON (UNT), Texas – Dr. Bland, who is part of the Department of Public Administration, started at UNT more than 40 years ago in 1982, and has dedicated his career to supporting students and tirelessly working to secure funding for scholarships, paid internships, and student-centric departmental initiatives. Throughout his time at UNT, he has served in leadership roles, including the inaugural chair of the newly formed Department of Public Administration in 1992, a role he filled for 21 years. He also currently directs the highly ranked MPA program, and serves in a variety of capacities across the department, college, university and field.

“UNT epitomizes what a great university education should be about – providing opportunities for students and faculty to discover their gifts that then empower them to become valued members of their community,” Dr. Bland said. “UNT has provided such an opportunity for me, for which I am most grateful. I am honored to be selected by the UNT Foundation for the eminent faculty award. It is a most satisfying tribute to a most fulfilling career.”

Even with his leadership roles for more than half of his academic career at UNT, Dr. Bland has published more than 21 papers, eight book chapters, and his landmark book, A Budgeting Guide for Local Government, is in its 4th edition. His publications appear in a variety of top-ranked journals, and he has presented more than 20 papers, served on more than 20 panels at conferences, written numerous monographs and reports, and very consciously published in a variety of trade and news outlets to get his work into the hands of those who can use it most.

As a result of his significant contributions to the field, in 2012, Dr. Bland was named a National Academy of Public Administration Fellow, an honor reserved for only the leading contributors to the field of public administration through public service or scholarship. In 2017, Dr. Bland was named an honorary member of the International City/County Management Association (ICMA). This honor is given to an individual who is not a professional in local government management, but who has achieved a significant and distinguished record in public service and contributions to strengthening local government. Along with these awards based on his scholarship, the field has honored Dr. Bland for his impact in educating local government leaders of tomorrow. In 2017, ICMA awarded Dr. Bland the Stephen B. Sweeney Academic Award. This award is given to an academic leader who has made a significant contribution to the education of students pursuing careers in local government. In the same year, the Texas City Management Association awarded Dr. Bland the inaugural Terrell Blodgett Academician Award which likewise honors an academic leader whose impact on educating local government leaders is significant. Dr. Bland was nominated for all of these awards by the former students whose lives he significantly impacted through the work he does at UNT.

“Dr. Robert Bland has dedicated his entire career to UNT, his discipline and his students,” said Dr. Dash, dean of the college. “He’s what can only be called a servant leader, and I cannot think of anyone more deserving of this award. I’m proud to not only have him in our college, but to see him recognized with the university’s highest faculty honor.”