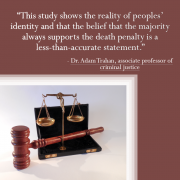 The data looks at education, race and gender in relation to opinion of capital punishment.

DENTON (UNT), Texas – Researchers in the University of North Texas College of Health and Public Service (HPS) Department of Criminal Justice have completed the first intersectional research on public opinion on capital punishment that incorporates measures of race, class and gender. The research was conducted by Andrekus Dixon, lecturer and director of undergraduate programs; Dr. Brooke Nodeland, assistant professor and online master of science in criminal justice degree coordinator; and Dr. Adam Trahan, associate professor and director of graduate programs.

“Public Opinion of Capital Punishment: An Intersectional Analysis of Race, Gender and Class Effects” was published in Sage journals’ Criminal Justice Review and showed the following:

“None of the past research is fully intersectional, so this study shows the reality of peoples’ identity and that the belief that the majority always supports the death penalty is a less-than-accurate statement,” said Dr. Trahan. “When more than 70 percent of the U.S. population is white, you end up with simple skewing. The majority of some groups support it while the majority of other groups do not.”

Mr. Dixon says the importance of intersectionality was striking.

“Our ability to take the intersections of class – in this case, education – race and gender just shows the very diverse opinions in relation to peoples’ views on capital punishment,” Dixon said. “I was also interested in the impact of education on the various respondents’ views of the death penalty. While there is nothing in our data that explain the findings, I believe our results set the foundation for future research on this topic, in order to potentially explore some of those unanswered questions.”

Dr. Nodeland says she also found the results regarding the intersectional relationship between race and education interesting.

“While there is a considerable amount of previous research suggesting that women oppose capital punishment more than men, our use of intersectional variables for race and education produced more refined results,” Dr. Nodeland said. “Specifically, our findings suggest that white educated and undereducated women were more likely to oppose the death penalty by 68 and 37 percentage points respectively while educated and undereducated black men were 234 and 271 percentage points more likely to oppose the death penalty.”

Dr. Neale Chumbler, dean of the college, says collaborative research is of utmost importance in HPS.

“As a tier-one institution, we are constantly looking for ways to expand and grow our research,” Dr. Chumbler said. “The fascinating information gleaned by this collaborative study not only helps shed light on how specific demographic segmentations impact opinion on capital punishment, but opens doors for future studies to determine why race, gender and class determine these beliefs.”